HAUNTED COVERED BRIDGES AND THEIR LEGENDS

October 09, 2010
Covered bridges are fascinating whether they are rumored to be haunted or not.  America's first covered bridge was built in 1804.  Pennsylvania boasted 1500 covered bridges at its peak, today, Pennsylvania has 200 covered bridges, still the highest number in the states.  In the swift evolving and ever-changing﻿ technological age we live in, covered bridges represent a simpler time and are very often revered as relics of the past by preservationists.
It's no wonder tales of haunting abound in legends surrounding covered bridges.  Bridges are themselves, tools for crossing from one side to another.  A covered bridge so easily harbors secrets within its walls, plus given that most if not all were built centuries ago, only lends to an air of nostalgia and probable ghostly activity.

﻿﻿   Stowe Hollow Bridge in Vermont, also known as "Emily's Bridge" or "Gold Brook Bridge," , was built in 1844.  The locals call it Emily's Bridge because it is Emily, they believe, who haunt it.  In 1849, Emily wanted to marry a man her family did not approve of.  Though forbidden to marry, the couple decided to elope and met one night, on Stowe Hollow Bridge.
Emily waited for hours for her lover to join her.  Broken-hearted, Emily hung herself from one of the rafters.  Now, her angry, desperate ghost haunts the bridge, waiting for her fiance' to return to her.  But many locals refuse to cross this bridge at night, because they believe it is Emily who shakes their cars, and sometimes, may even slash visitors with invisible claws.  Tales of horses, people and cars being slashed by these invisible claws have run rampant for 150 years.  Others have heard a woman weeping.  Emily, perhaps? 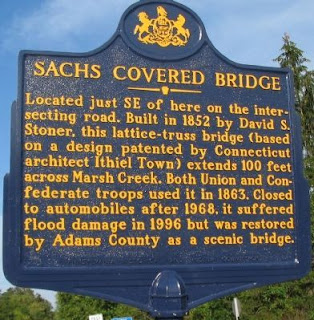 Sach's Covered Bridge in Adam's County, Pennsylvania, was built in 1854 and supposedly haunted by three Condederate soldiers.  They deserted their posts and when captured, were hung from the rafters inside the Sach's Bridge.  Folks who have taken pictures of the inside of this covered bridge get strange orbs on the film.  When inside the covered bridge, many people report feeling cold spots.
﻿
﻿ 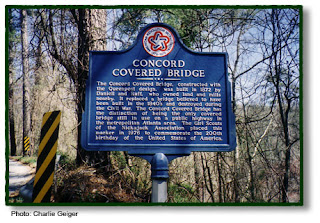 The Concord Covered Bridge in Smyrna, Georgia, is one of just 12 covered bridges in the state of Georgia.  It is a one-lane bridge, built in 1872.  It is about 132 feet long and only 16 feet wide.  Supposedly, if you park on the bridge, turn off your lights, and place a Snicker's bar on the roof, you will hear ghostly pattering and then the Snicker's bar will be gone.  The ghostly pattering is of children who drowned in the creek below.  It is recommended due to a decent amount of traffic on this road, that you don't try this.  Still, the legend is interesting as I've never before heard of the dead enjoying Snicker's bars!
﻿﻿﻿﻿﻿
﻿﻿﻿﻿﻿

The Van Sant Covered Bridge in New Hope, Pennsylvania, was built in 1875 and spans Pidcock Creek.  Some people believe a woman haunts this bridge, others, a highwayman who was murdered here.  The woman, supposedly, threw herself and her baby off of the bridge and drowned in Pidcock Creek. Regardless of its ghostly inhabitants, an overwhelming sense of sadness permeates this covered bridge, a stark contrast to the beauty that surrounds it.

﻿﻿﻿﻿﻿  Jericho Covered Bridge in Joppa, Maryland, was built in the early 1800's.  During the civil War, several lynchings were reported to have occurred on this bridge.  If you drive your car onto this bridge late at night and look in your rear view mirror, you are supposed to be able to see the image of a dead person swinging from the rafters. 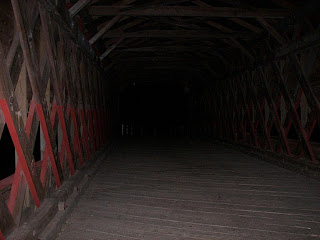 Glasgow, Kentucky.  A covered bridge exists here where, legend says, is haunted by sounds of an axe hitting a chopping block.  What's being chopped?  A head, of course.  In the 1800's, a slave kidnapped the daughter of his wealthy master and took her back to the covered bridge.  He cut off her head with an axe.  People say if you drive onto the bridge and roll down the car windows, you can hear the sound of the axe hitting the chopping block. 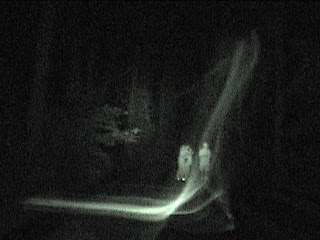 The Colville Road Covered Bridge in Paris, Kentucky, is haunted by a girl killed in a car wreck with her boyfriend.  Returning from the prom, they prepared to stop at the bridge and instead careened into the water below.  If you sit in your car in the middle of the bridge, headlights might come up behind you, but when you look you see the car has fallen into the water.
﻿﻿