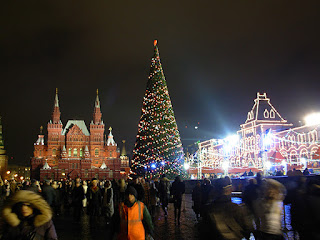 Russian Christmas is celebrated later than in other countries, including the Untied States and most of Europe.  Most Russian Christians belong to the Orthodox Church.  The Orthodox Church uses the old Julian calendar to schedule holidays.  Since they use a different calendar, their Christmas celebrations are 13 days later, on January 7th.
After the Russian Revolution in 1917, Christmas was banned throughout Russia, as were other religious celebrations.  Christmas was forbidden to be openly celebrated for 75 years.  In 1992, Christmas was once again allowed to be openly observed.

Today, Christmas is once again celebrated in grand fashion.  Cathedrals are filled with incense, and the faithful participate in all night masses, amidst with painted icons of Saints. 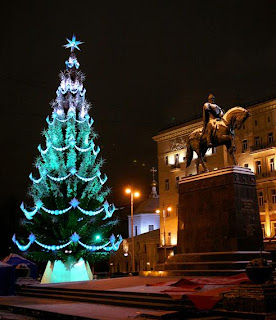 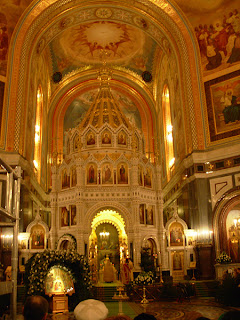 The Christmas Eve meal is served after evening mass.  The Christmas Eve feast is also a meatless meal.
The table is covered by a white table cloth, symbolizing Christ's swaddling clothes.  Hay is brought forth as a reminder of the poverty into which Christ was born.  A tall white candle is placed in the center of the table, symbolic of Christ, "The Light of the World".  A large round loaf of Lenter bread, symbolic of Christ.  "The Bread of Life", is placed next to the candle.
The Traditional Christmas Eve meal includes 12 main dishes, for Jesus' 12 Apostles.  Typically Russians enjoy foods such as: fish, borsch (beet soup), millet-stuffed cabbage, dried fruit soup, Kutia (whole wheat porridge with honey and poppy seeds).  Kutia is a traditional Christmas dish which is meant to promote long life, unity and good fortune during the Christmas season. 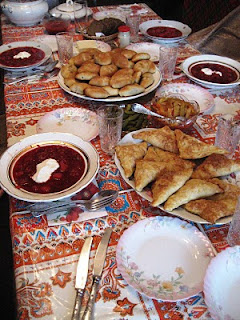 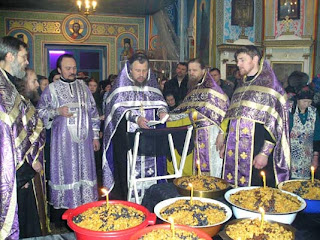 The father of the family leads in "The Lord's Prayer".  The Lord's Prayer is followed by prayers of thanksgiving for past, present and future blessings.  After the prayers,  the father of the family proclaims "Christ is Born" and the family responds "Glorify Him".
The mother of the family blesses each person, by putting a cross on their forehead with honey, saying, "In the name of the Father and of the Son and of the Holy Spirit, may you have sweetness and many good things in life".
The Russian Christmas Tree is called "Yelka".  The Yelka is a traditional Christmas symbol in Russia.  Most Russian's decorate their Christmas tree with lights and flowers.  The flowers on the tree are real and silk. 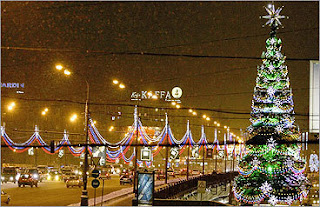 St. Nicholas used to deliver Christmas gifts to the children, but Grandfather Frost took over in honor of the New Year during communist rule.  Grandfather Frost continues to deliver the Christmas gifts to the children, even though communism has fallen.  Instead of a Santa's red suit, Grandfather Frost wears a blue suit.  Grandfather Frost is accompanied by a handmaiden who hands out the presents.
The legend of Babouschka has returned to Russia.  Babouschka is said to be a woman who helped to direct the Three Kinds to Bethlehem to visit the Baby Jesus.  She was invited to join the Wise Men, but declined because of the cold.  She changed her mind, but by that time the Wise Men wree gone.  Babouschka continues to spend Three Kings Day delivering presents and she searches for Jesus' crib.

January 03, 2012
This comes from www.thatvillagehouse.blogspot.com .  I made something similar a couple years ago, without the pots.  It was about 6 feet high.  I got the inspiration from a Chirstmas dectoration that we bought at Target. This is a very good idea and make a great enterance to your home.  So here's a little something to thing about for next year.  Before you know it December will be here again.  You could also do something like this for an Easter theme.   Enjoy! A Merry Welcome! So here is my first Christmas project for the year!! I saw something similar at our church's Advent celebration & pretty much straight up copied it. I couldn't help it. It was love at first sight! I plan to make a 2nd stack to go on the other side of my door, so I'm not completely done, but I thought I would share it with you anyway. I started with 3 different sized boxes...9, 12 & 14 inch cubes. I used an ice pick to punch holes in each of them so that I could run
25 comments
Read more

December 11, 2013
How would your kids like a letter from Santa Claus this year? I've designed a simple template for Santa letterhead that can help you make the magic happen. Some ways you could put it to use: Your  Elf On The Shelf  could bring a letter back from his nightly trip to the North Pole. Use as a little extra convincing for curious little ones asking a few too many questions. Include a special note from the big man in your advent calendar. Use as a thank-you note for the milk and cookies on Christmas Eve. Tuck inside your favorite holiday book encouraging kids to go to bed. Attach to one of those "too big to wrap" gifts as a gift tag. Use as a gift certificate for grown-up gifts, like a special date for your husband or an outing with a friend.  DOWNLOAD | Grab the PDF file  here   or the JPEG  here . Print on any color paper. (I used a nice textured cardstock). Do your best at some jolly handwriting and you're done! I wouldn't stress about mailing
17 comments
Read more

A GREAT FROSTING RECIPE FOR PEOPLE WHO DON'T LIKE FROSTING!

January 24, 2012
This recipe comes from www.the-girl-who-ate-everything.com .  Give it a try see if they're right! There are two kinds of people: those who lick the frosting off a piece a cake and then those who eat the cake and not the frosting. What do I prefer? Do you even have to ask? Both, together...in copious amounts. For those who aren't frosting people, their reasons usually are that it's too sweet. I've never had that feeling but most of you know my sweet scale by now is a little skewed. This frosting is for those that don't like it too sweet. I've been wanting to try this frosting ever since I saw it on the Pioneer Woman but was a little hesitant because it was flour based which didn't sound appetizing at all and then it said to cook the frosting. Cook the frosting? The result is silky, light, whipped cream-like frosting. My husband teaches early morning seminary at our house. For one of his student's birthday's he asked if I could make
2 comments
Read more