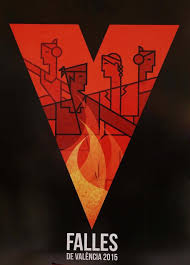 In the middle of the Mediterranean coast, Valencia city, celebrates each year the final days of the winter and the arrival of spring with spectacular fires of pyrotechnics. From March 15th to the 19th (the feast of Saint Joseph, day of the father in the whole country), Valencia is given over to a carnival of bonfires, fiesta, fireworks and a healthy dose of satire known as Las Fallas, "the fires". 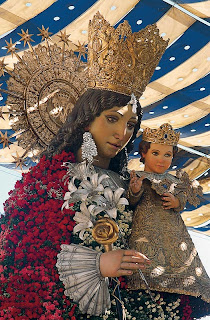 Displayed on every corner all over the city are colorful ninots, giant paper-mache' figures often 20 feet tall or even more that have been paraded through the streets and then place in fantasy groups to tower over excited spectators. Each one in some way satires a political figure, or a soap star, or more exotic creatures from the movies, TV, sports idols, or simply imagination. Some of them are grotesque...others playful and charming...all are larger than life and up for public scrutiny. 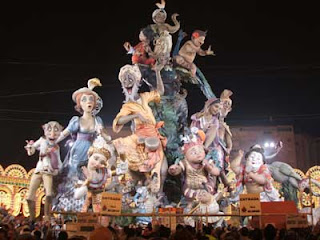 Every day at 2 p.m., firecrackers rip through the Plaza del Ayuntamiento in a noisy event called La Mascleta'. This concert of gunpowder is very popular and involves different neighborhood groups competing for the most impressive volley, ending with the terremoto, (literally means "earthquake") as hundreds of masclets explode simultaneously. While this may not be for the frail or faint hearted, you will understand how the Valencians got their valiant name. 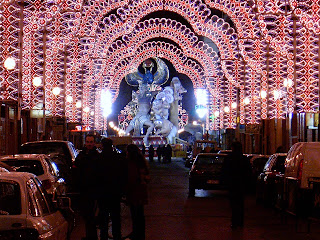 Another important event is the Ofrenda de Flores a la Virgen de los Desamparados, a beautiful ceremony every March 17th and 18th, that honors Valencia's patron Virgin. Thousands of Falleras and Falleros arrive to the city from every corner of the Comunitat (Valencia State) and take the streets wearing traditional costumes and dancing to their neighborhood or village bands as they wind their way to the Plaza de la Virgen to offer bouquets to the giant image of the Virgin. 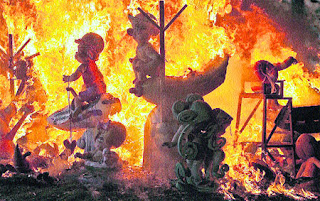 Historians say that the origins of the festival go back to the time when carpenters cleared out their workshops and talleres at the end of winter, throwing out odds and ends of wood and old candles and lighting them on the street the day of Saint Joseph. 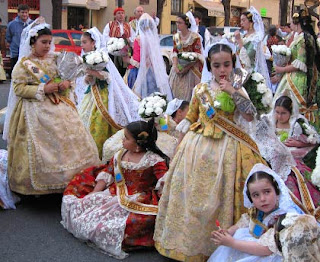 Nowadays, celebrations draw to an end with a fabulous firework displays in the Paseo de la Alameda, called the Nit del Foc (literally "The Night of Fire"), on March 18th. All Fallas burn all over the city the following night (including the winner of the competition) in a tremendous spectacle of fire and joy. Valencia is at that moment like Nero's Rome, a city in flames. That's why Valencians call this the best firework fiesta in the world! 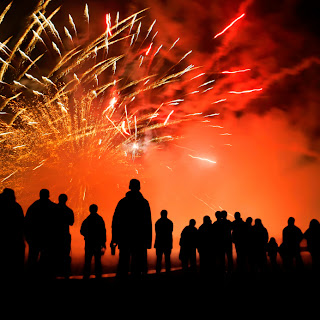 
Keep the fireworks in mind even if your are not a fan. Here they are not just fireworks. Over th centuries the Valencians developed them into a form of art. Valencia is the unrivalled Mozart of fireworks. Valencian pyrotechnic crews get regularly contracted for blowing up big world events, such as Olympics and New Years. The fireworks of the Fallas must not be missed.
There are two types of fireworks during the Fallas Festival.
The Mascleta
The firecrackers. The mascleta is not visual, it is just the explosions. But remember: in Valencia it is not just noise. It is an orchestra, there are all those various types of explosions and the Valencians attempt to create some kind of symphony out of them, much like playing a piano. There are various professional pyrotechnic bands who compete to create the best "melody".
The best mascleta is meant to be on the last day of the Fallas Festival, the 19th of March. But get there early...most people will want to see it. 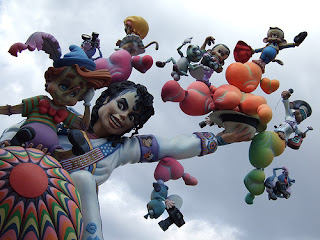 The Castillo
The castillo is the visual fireworks, performed at night. Even someone who is not a fan and always finds the fireworks boring must see what the Valencians can do. It's not just a few green balls, few red balls and a bunch of white rays. It will leave you in awe with an open mouth, the shear complexity, aesthetics and artistic harmony is incredible. Words can't describe it. You have never seen anything like it.

Nic De Foc
"Night of Fire". Usually the castillo lasts for 10-15 minutes. The Nic de Foc is the highlight of the Fallas fireworks...it is extra special, extra visual, extra inventive and extra amazing. It goes on for 25-30 minutes. Don't miss it and do pick a good spot early...once it starts the whole city will move towards a good spot and huge avenues will become totally impassable. 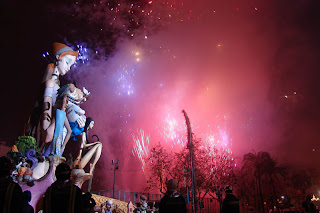 Street Petards
This is one of the more unfortunate side of the Fallas Festival. Witch such Valencian devotion to explosions, the mascleta and castillo are simply not enough. On March 1st, the first petard is thrown on the streets. Over the next two weeks it gets progressively more until, finally, on the 15th, the city is entirely in a war zone. For the next four days, you simply won't walk 3 seconds without hearing an explosion to the left and to the right.
It is fun to walk in such mayhem and it adds to the festivals atmosphere.     Unfortunately, its goes way beyond fun. Many of the petard throwers are benign family people entertaining their kids, or the kids themselves are doing the entertaining. This is hard enough in itself...it's not that much fun to jump of fright every ten minutes. But there is also that very malicious breed of adolescent youth who will try to catch you off guard and throw it under your feet when you are not watching. Those petards can be very strong.
You will also come across something called borrachos. These are tubes which, once ignited, move around in frantic thrusts, with a long tail of sparks coming out of them. They can look very scary, thrown into the middle of the crowd (and this does happen often...otherwise it wouldn't be funny for those who throw them) but they don't appear to be very harmful in reality.