THE HISTORY OF EGGNOG!! 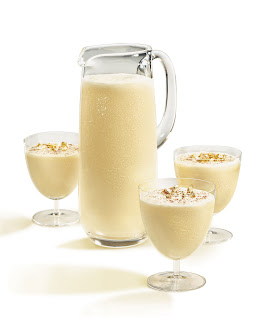 Eggnog is the starter of that wonderful holiday season.  It's what reminds us that the wonderful time is about to begin.  That time when peppermint mocha's, presents, family, friends, carols, Christmas movies, decorating trees, and eggnog is abound.  It's that time of the season already.  It makes you think when something like eggnog was invented and how.  Did it begin as something special just for the holidays or was it begun in a whole different way?  The creamy richness of that powerful drink is something well worth the effort of looking into and that is just what we are going to do.  So before you begin your holiday season take a look at this and become enriched in all the flavorings of Christmas.
The history of eggnog is a bit shrouded.  A lot of people believe that it was brought from England to America which in a way could be true.  After all, the word is related to a lot of wine punches and milk drinks that were made in the English tradition.  When brought to America however, it was not necessarily what the old world had in mind.  Instead, Americans brought rum into the equation and took out the wine.  So, the idea is that rum was traditionally called "grog" so goes the term "egg-n'grog", after that it was shortened to  eggnog. 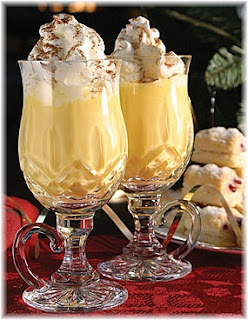 Now on to another story.  There are people that believe that the word "eggnog" comes from the term "noggin", which was what they called a certain type of wooden mug.  Along with that story comes the belief that eggnog was originally sherry and milk (not the wine and milk as the above story stated).  There are many that believe that the stories should run together.  Meaning that the drink was actually called "egg'n'grog in a noggin".
Through Colonial America it was considered a great wintertime drink and very popular indeed.  It was rich, smooth, spicy, and alcoholic.  It was the perfect combination for those early Americans.  In the 1820's, a man named Pierce Egan put a recipe in his book taking out the rum and adding brandy which further increased the popularity of the drink.  In the 1800's it was a social drink.  It was drank at every party around that season and was considered not to be in good spirits if you did not serve the drink or even drink it. 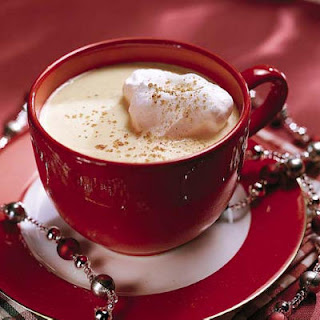 Believe it or not, it was not only a Christmas drink.  It was a tradition for all the men to try to finish numerous drinks of the stuff on New Year's Eve.  It was a test of one's manhood.  George Washington loved eggnog.  He had his own concoction which involved rye whiskey, rum and sherry.  It was very powerful and it took some type of person to be able to get past a glass.
While debatable as to its sources we know one thing, that eggnog has been enjoyed in many traditions.  While most of us enjoy the flavor of eggnog without the liquor, we can at least all be thankful for that one person that helped our wonderful tradition be born.  With the first glass of eggnog poured, the holiday season begins.  May many more glasses be passed around and the feeling of the holiday spirit with it.
Here's a little recipe for non alcoholic eggnog, if you like it, don't be afraid to pass the recipe onto someone else!

In a saucepan over low heat, blend the milk, cinnamon, cloves and half a teaspoon
of the vanilla.
Keep stirring while the mixture heats, and remove from heat just before boiling.
In a bowl, mix together sugar, Splenda all egg yolks.
Gently add a little at a time, pour in the milk mixture while whisking.
Transfer mixture to saucepan over medium heat while continuing to stir.
Keep stirring until mixture starts to resemble custard.
Don't let boil.
Pour and strain the mixture into a pitcher.  Making sure to remove cloves.
Let pitcher stand in refrigerator for approximately 1 to 2 hours.
Gently stir in the cream, vanilla and ground nutmeg.
Let stand in the refrigerator overnight.
Spread some holiday cheer all around.

July 15, 2013
Did you know that the fruit this summer is supposed to be the best it has been in years? Apparently, fruit loves hot weather. I personally have eaten more peaches and cherries this summer than I have in about five years just for that reason.  As I have been a little overzealous lately buying peaches and cherries I found myself with a few peaches that were going to be too ripe for me to eat on the same day. That is unless I wanted to have them for every meal plus a few snacks. So I decided to make this recipe for Vanilla Peach Coffee Cake.  Vanilla Peach Coffee Cake Adapted from  Allrecipes.com Batter: 2 eggs 1 C milk 1/2 C oil 1 tsp. vanilla 1/2 C  sour cream 3 C flour 1 C sugar 1 tsp. baking powder 1/2 tsp. salt 1/2 tsp. baking soda Topping: 5 or 6 large peaches, diced. 3 Tbsp. butter, melted 11/4 C brown sugar 1Tbsp. cinnamon 2 tsp. nutmeg 4 Tbsp. flour Vanilla Icing: 1 Tbsp. butter 1 tsp
69 comments
Read more

January 03, 2012
This comes from www.thatvillagehouse.blogspot.com .  I made something similar a couple years ago, without the pots.  It was about 6 feet high.  I got the inspiration from a Chirstmas dectoration that we bought at Target. This is a very good idea and make a great enterance to your home.  So here's a little something to thing about for next year.  Before you know it December will be here again.  You could also do something like this for an Easter theme.   Enjoy! A Merry Welcome! So here is my first Christmas project for the year!! I saw something similar at our church's Advent celebration & pretty much straight up copied it. I couldn't help it. It was love at first sight! I plan to make a 2nd stack to go on the other side of my door, so I'm not completely done, but I thought I would share it with you anyway. I started with 3 different sized boxes...9, 12 & 14 inch cubes. I used an ice pick to punch holes in each of them so that I could run
112 comments
Read more

March 27, 2018
The Sapporo Snow Festival is a famous festival held annually in Sapporo, Japan, over 7 days in February.  Currently, Odori Park, Susukino, and Tsudome are the main sites of the festival.  The 2011 Yuki-matsuri dates are February 7th to the 13th.    The festival is one of Japan's largest and most distinctive winter events.  In 2007, about 2 million people visited Sapporo to see the hundreds of snow statues and ice sculptures at the Odori Park and Suskino sites, in central Sapporo, and the Satoland site.  The festival is thought to be an opportunity for promoting international relations. The International Snow Sculpture Contest has been held at the Odori Park sit since 1974, and teams from various regions of the world participate.      The subject of the statues varies and often features as event, famous building or person from the previous yer.  For example, in 2004, there were statues of Hideki Matsui, the famous baseball player who at that time pl
405 comments
Read more